We decided to wake up early so we could make the most of our last full-day in Nice. The rest of our room woke up at the same time, too, so we were inspired (and a little bit guilted) into getting out into the city. Breakfast was 7€ at the hostel which, if you’re traveling on a budget, is a bit steep for what you get. A typical European breakfast is an assortment of cold-cuts (salami, ham, cheese) and a mixture of wheat bread and small pastries, with a side of Nutella to spread on everything. All good enough, but Jeannot was the only thing on our minds. We got more bread – this time a baguette cereales, which is basically a baguette that tastes like a giant everything bagel – and more beignets. Then we went back to the edge of the beach and just sat in the sun for what seemed like an eternity. It was already hot and we were both still practically asleep, neither of us necessarily in a mood to make a decision. “What do you want to do today,” one of us would mumble the other. “I’m good for whatever,” the other would reply. “Yeah, same.” And so we sat in this loop of travel fatigue for almost twenty minutes.

We all know that spontaneity is the spice of life; Plans and itineraries only get you so far. And, neither one of us being fans of the things, Harman and I tried to figure out just what we wanted to do for our last full day in France. So, on a whim, we forced ourselves from our sleepy, carb-induced stupors. “Let’s go to Monaco.” Within an hour we were on the train heading to the City State that was home to the most famous casino in the world. The train ride traced the coast of the Riviera and provided views of Nice’s Old Town district. It was another moment when you feel as if you’re on the set of a big-budget blockbuster. The beaches in Old Town are sand, not rock like the ones in the city centre, and much less crowded because they are surrounded predominantly by residential housing. Almost like it’s this little secret world you don’t want to disturb but would give anything to be a part of. How could anybody ever leave this place?

After about an hour on the train, we found ourselves in the city that welcomes the likes of James Bond on a regular basis. You wouldn’t know it from where the train drops you off, but (obviously) Monaco is a haven for the world’s ultra wealthy. You may be greeted by simple apartments and other residential areas, but prices of those apartments can reach more than $9,000 per square foot. Just try to process that. Harman and I were scared to kick a pebble on the ground in the event that we were actually kicking around loose diamonds by accident. As you get deeper into the city and closer to the water, the obscene wealth hits you like a wave of expensive $1,000 cologne. It’s almost like the air you are breathing is just better, practically laced with essential oils and fine wine and liquors that you can’t pronounce the name of. The cars are insane as you’d expect, with Maybachs and Lambos and Ferraris driving around like any Cruze or Camry. You lose count of how many yachts are docked in the harbor. Every woman walking by looks as plastic as any reality TV star, and every man looks like the kind of guy that doesn’t tip at restaurants and always wears his sunglasses indoors. Just outside the casino is a small outlook point where Harman and I sat down to take five. There was a mother with her toddler son next to us, whose outfit of baby Ralph Lauren cost more than any article of clothing either of us had ever owned. 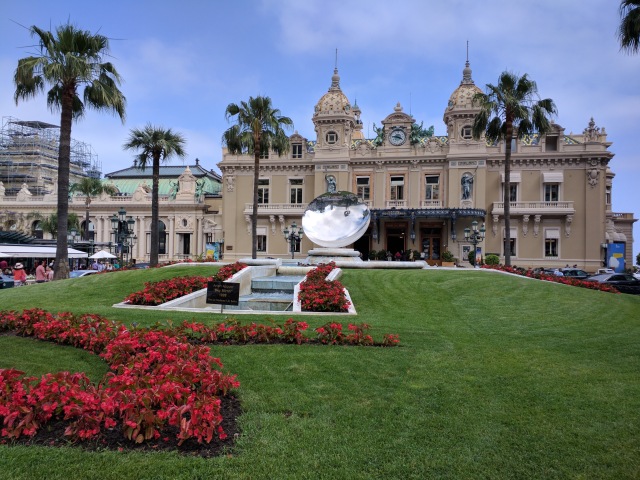 We soon made our way to the doorsteps of the world-famous Monte Carlo Casino. The building itself is a work of art, with ridiculously ornate statues and paintings and architecture that lives up to the hype. There’s a surrounding garden that leads you out into a bouquet of high-end retail stores, including Prada, Louis Vuitton, Dior, Mont Blanc, and a few that neither of us had ever heard of before. Every shop has multiple security guards who greet you before you’re allowed to enter, and when we walked by the Cartier shop I smiled at the man standing in the doorway, but I’m pretty sure he could tell that I couldn’t even afford to look at anything they were selling so he simply told us, “Get the hell out of here, peasants.”

When you get to the front entrance of the casino you are once again reminded of the disgusting amount of wealth that gathers there at any given time. Vintage race cars that cost more than most houses. Suits and dresses that cost more than any car I’ve ever owned. Watches and jewelry that could wipe out my student debt. I was afraid to step on the grass the wrong way for fear of racking up a triple-digit bill. After you get past the security checkpoint you are greeted by ceilings that seem to go on forever, covered in paintings and gold and other precious metals that make you realize you are walking inside of an art history museum that just so happens to house the world’s most famous casino. So what are two broke 20-somethings to do? Play the slots, of course! (Only because there’s a 70€ cover charge to get into the room with the real gamblers; The penny slots are free to play.)

Neither of us won anything (we both lost 5€) but it was still one of the most memorable parts of the trip. However, we were getting tired of being surrounded by people who had more cash in their pockets than we’d ever seen in our lives, so we decided to go in search of something cheap to eat. We didn’t find anything (a bottle of water was $5) but we did get a chance to walk the streets that the Grand Prix races through, and because one of the events had been only a few days earlier I was able to grab some of the red tape that surrounds the out-of-bounds area. It was nice to imagine what it was like to be someone in the crowd or someone on a yacht as million dollar sports cars race around the harbor on the streets above. You wonder how (and why) anyone ever gets to that place in life. Eventually we made our way back to the Villa to relax before heading out again to climb the staircase that leads to Nice’s Castle Hill.

Hiking up the staircase takes at least 20 minutes, and with the elevator out of order we had no other choice. But the walk was worth it: You get a near 360° view of the city and Riviera, making you feel as if you’re on top of the world. You feel like you’re an army general from the 1800’s looking out onto the sea to anticipate any impending pirate ships coming to attack. But I had a baguette in my hand instead of a telescope, so the daydreaming stopped there. The trail continues up into the connecting park, which I followed for at least another 20 minutes to find a hilltop, man-made waterfall that you can see all the way from the shoreline of the beach. It was still warm at that point in the day so the mist that cascades off of it felt as refreshing as anything. It was like you had serendipitously stumbled upon some sort of tropical oasis. But even further beyond that you climb to the very top of the park which gives you a dizzying view of the sea and country. I spent a lot of time trying to get some panoramic shots with my camera, but eventually got tired of accidentally photobombing all the selfies being taken by tourists alongside me, so I walked to the level below, parked myself on a bench, retrieved a mini-bottle of wine from my backpack and enjoyed a drink on top of the world. There was also a delightful tree that felt as if it had mystical capabilities standing beside me. I almost shared a bit of my wine and poured some into the soil.

Yet after one sip the Castle Park police waved me down and informed me that at 8 o’clock the park closes. So I found myself in a group of about 15 other tourists who were just as confused as I was about how to get out of the park. We were also joined by one very happy-go-lucky French woman who was dividing her time between walking down the hills of the park and the sandwich in her hand. I wondered how many times she’d made this walk. We found ourselves practically on the complete opposite side of Nice, with endless views of the Old Town district. So many of the houses had rooftop yards and gardens and I never wanted to leave. Along the way down I stopped and picked a few more wildflowers for the road. 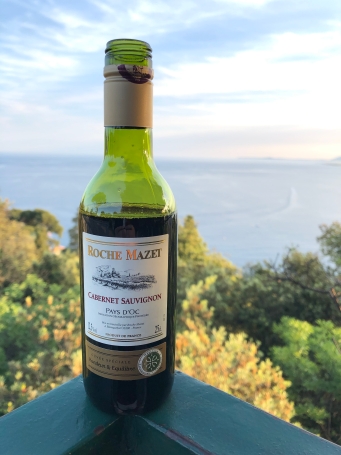 After about an hour of wandering I made my way back to the Villa where Harman and I were greeted by Max from Finland and Merih from Turkey who invited us out for a drink. We were in France but found ourselves in an English pub for the night, sitting in a red-velvet booth at a round table’s worth of German beer. A Finn, two Americans, two Swedes (who Max brought with him), and a Turk. These were the nights that you desperately wished for when traveling, whether domestic or abroad, whether solo or with a group. Nights full of sights, sounds, and soulful experiences, alongside new friends – even if you know you’ll never see them again. Harman and I were already almost a third of the way finished with our trip. The next day we’d arrive in Italy but neither of us could ignore the fact that our suspended reality was quickly beginning to fall back down to earth.

I still never wanted to go back East; Any progress forward was seen simply as approaching the inevitable. But in a few weeks we’d be in Switzerland and Harman would be heading back home, leaving me with a week alone in Europe. The options were endless: Maybe I’d swing up to London. Maybe I’d take a bus to Salzburg. Maybe I’d stop and visit my friend in Essen, near Cologne. I am at the age in which I want to start living my life for me; Making decisions that will follow me for a long time and hopefully direct me down the right path. I was trying to embrace the choices that move our stories forward, never backward. I wanted to know how my story would end, but I needed to be the one to write it, myself.

College grad with an old soul, just trying to figure my life out. Fan of movies, music, photography, dad jokes, and not taking life too seriously. View more posts